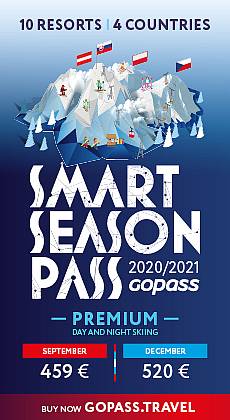 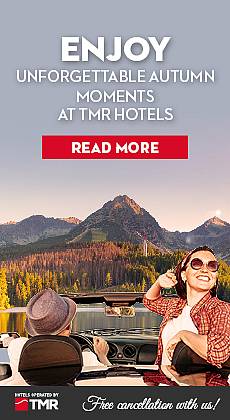 Have you heard about the enchanted dragon bride that lies under Mt. Chopok? Don´t forget to visit her while staying in Jasná. Who knows, you may be lucky to see her waking up after a hundred-year-long sleep!

Where can you find her?

Use cable cars to get to the top of Mt. Chopok comfortably from the northern or southern side. To enjoy the best view of the Dragon Bride, walk down along the 1c ski piste (northern side) and after about 50 metres, turn right to wooden barriers. There you will see the Dragon Bride that has been turned into a stone.

Discover the story of a dragon bride

Our friend Demian the Dragon, the guardian of the beautiful valley Demänovská dolina, has always loved nature and enjoyed it mostly from high above. He often used to fly above the valley, magnificent caves, pointed rocks, over Mt. Chopok to the southern side and back. Crazy turns, somersaults and manoeuvring in the air were the best fun. However, he was constantly missing something. He felt lonely. After all, he was the only dragon in the region.
On one summer day, he heard someone wailing and crying terribly in the area of Vrbické pleso (tarn). He flew over and couldn´t believe his eyes! A dragoness was sitting on the tarn bank, unhappy because she had got lost in the valley. Demian learned that her name was Alica and she had come from far away. He soothed her and promised to help find her way back home but only after showing her around in Demänovská dolina. Alica agreed so they set out for a sightseeing flight together. She instantly fell in love with the beautiful nature of the Low Tatras and decided to stay there for some time.
Days, weeks and months were passing and Alica was constantly putting off her going home. She got enchanted by Demänovská dolina and moreover, there was nothing positive to expect at home. She was supposed to marry the ugly seven-headed dragon Maximilian that threatened to destroy her country. Our friend Demian didn´t like this idea at all, of course. He didn´t want Alica to leave, let alone to marry the horrific seven-headed dragon! So he decided not to let her go, marry her himself and live with her happily in Demänovská dolina ever after. Alica agreed because they were in love and felt happy together.
Their wedding was magical and Alica looked like a real bride with an emerald tiara and a snow-white veil. Demian couldn´t take his eyes of her beauty. They decided to exchange their wedding vows on top of Mt. Chopok. Alica arrived for the ceremony from the northern side of the mountain, Demian from the southern one. It was a gorgeous sunny day but within a few seconds, the weather changed and a terrific storm broke out. It had been brought about by the evil seven-headed Maximilian the Dragon. He had got wind of Alica´s betrayal and had come to send down destructive fiery lightning on the wedding guests. Alica was struck by one of the flashes and turned into stone. Demian was struck too and turned into a metal sculpture. The curse of the couple in love should last for one hundred years, one hundred days, one hundred hours and one hundred minutes.

It has already been some time since the unfortunate wedding day. And who knows, maybe their cruel punishment is about to end soon. Watch carefully if Alica and Demian come back to life again right in front of your eyes!

Discover more benefits at www.gopass.skDiscounts and points for every purchase with GOPASS card.

To Mt. Chopok from the Liptov region Travel to Mt. Chopok from the northern side. Use three linked cableways between the lower station of Biela Púť and the peak and enjoy beautiful views of the Liptov region on one side and the High Tatras on the other. Along the way, there are various attractions in the Maxiland summer park, mountain carts in Biela Púť and a bungee trampoline in the area of Priehyba. 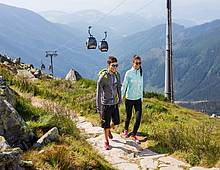 To Mt. Chopok from the Horehronie region There are two modern cable cars available for passengers who travel to Mt. Chopok (2,024 m asl) from the lower station of Krupová on the southern side. Horehronie offers flawless relaxation – beautiful long valleys, breathtaking sceneries, clean air, silence and peace everywhere around. Lovers of adventures can try mountain cart downhill from Kosodrevina to Krupová.

TIPS FOR SUMMER HOLIDAYS IN JASNÁ

Jasná is a beautiful location with a wide choice of leisure time activities. Choose what you and your family like most.